Once Upon a Time there was an Apple Seed 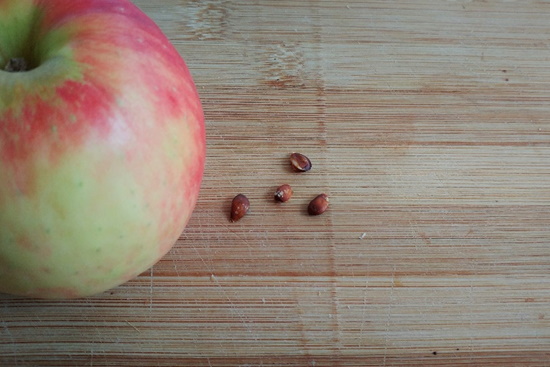 Once upon a time there was an apple seed, bitten-into by me as I was munching on an apple and didn’t realize I was biting into its core.

The unlucky pip did not survive the mastication and unfortunately, was spat out half-chewed. (For those who wonder, nor did it make it to the picture. I wouldn’t gross you out with a chewed pip. The picture contains no chewed items and is for illustration only.) It did, however, inspire me to muse about the power of seeds. So in its memory, here we go:

Inside an apple is hidden an entire apple orchard!

Whoa! But yes, let me explain. This is where we get realistic. Later we’ll get philosophical.

An apple has the potential to ‘birth’ as many trees as there are seeds in its core, but the wonder doesn’t stop here. All the future trees sprouting from those future apples are also descendants of this one apple, and on and on and it goes.

So a seed, although tiny and seemingly ordinary, is quite extraordinary in its potential. In it is embedded a future, a continuity. (Assuming it’s given a fertile ground to flourish plus water and care.)

And now we get philosophical.

What if we think of the seed as a metaphor, like a seed of an idea or a person’s potential? What if we could fast forward many years and observe what became of that person or how the initial idea materialized in the real world?

We could, of course, ponder all this under an apple tree and reflect on that one seed which, many years ago, sprouted right here.

Now, if you’ll excuse me, all this talk made me peckish. I’m going to slice me an apple!