Why Raw and Fermented Dairy is Best

In a world full of antibiotics and processed foods, raw and fermented dairy is making a comeback. More people are making their own yogurt or kefir, and raw cheeses are also coming back in fashion. The main reason? Health. Why? In one word -- probiotics. Or two words -- good bacteria.

The bulk of your immune system is centered in your digestive system or gut – roughly 70% of immune defenses are located here. If you eat processed foods or take too many antibiotics, the trillions of bacteria that help digest food and keep intruders away will be out of balance. Probiotics, the live microorganisms found in fermented foods like yogurt or kefir, as well as raw dairy products, like raw cheese and raw milk, give the bacteria a boost and strengthen your immune system.

The word yogurt comes from Turkey and refers to milk that is tart and thick. Yogurt didn’t originate centuries ago from a single country or region; it was found in almost every culture that kept animals for milk. The lactic acid produced from the fermentation also preserves the yogurt and extends its shelf life. Starter cultures in yogurt may produce the enzyme lactase, which digests lactose. Yogurt contains transient beneficial bacteria that keep the digestive system clean and provide food for the friendly bacteria that reside in it. When fresh milk is left in a container with “good bacteria,” the milk thickens or ferments and has a delicious sour taste.

This yogurt has a rich, slightly tangy taste. It can be made with several types of low-fat or whole milk, including raw milk. The starter culture has two live active strains of bacteria: L. Bulgaricus , and S. Thermophilus .

Originally from Finland, this is a thicker yogurt with a milder taste. It can be substituted for sour cream or parfaits in recipes, and needs to be made with a yogurt maker. Unlike other yogurts, it can’t be re-cultured, and must be stored in the freezer. The starter has three live cultures: lactic bacteria ( Lactococcus lactis subsp. cremoris, Lactococcus lactis subsp. lactis biovar. diacetylactis, Leuconostoc mesenteroides subsp. cremoris ).

Like yogurt, kefir can be made from any type of milk – cow, sheep, or goat, coconut, rice or soy. Several characteristics of kefir, however, differ from yogurt. When the mixture is stirred together, gelatinous white or yellow particles called “grains” bond together as the bacteria and yeast mix with milk proteins (caseins) and sugars. The grains ferment the milk, and their SCOBY creates the cultured product.

Kefir contains several major strains of “good” bacteria usually not found in yogurt, including Lactobacillus Caucasus, Leuconostoc, Acetobacter, and Streptococcus species. It also contains beneficial yeasts, such as Saccharomyces kefir and Torula kefir. The kefir culture colonizes the intestinal tract; taking the process one step further then yogurt. The good bacteria and yeast clean up the intestinal lining and eliminate the bad pathogens. Over time the body becomes more efficient at resisting internal parasites and pathogens like E.coli and the immune system gets stronger.

Kefir is easily digested. Because it is such a nourishing food, kefir has been used to help patients with cancer, chronic fatigue syndrome and AIDS. Its relaxing effect on the nervous system has helped people with ADHD, depression, and sleep disorders.

Homemade milk kefir has a larger amount of probiotics than commercial kefir, but the strains of yeast and bacteria are fairly standard. Milk kefir grains should be grown with organic milk, and don’t contain gluten (some commercial varieties may use gluten thickeners.) All grains are removed with a strainer before the kefir is used, and are added to a new batch of milk. Homemade kefit costs much less then commercial kefir and once the culture is started it can be reused several times.

Another healthy probiotic beverage, water kefir is made with grains that can be used to culture sugar water, juice, or coconut water. It’s a good alternative for anyone that’s lactose intolerant .

Water kefir cultures can also be reused several times. They offer many of the same benefits as milk kefir cultures, but without the presence of dairy. As a result, water kefir is a popular option for vegans and individuals who dislike dairy, almond, or other vegan pseudo-dairy kefirs. 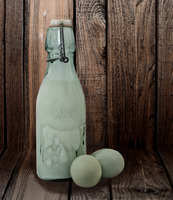 If you aren’t familiar with the term raw dairy, you might be curious how dairy products like milk could be anything other than raw. The answer is in the process that takes place to help bring them to market. When dairy is pasteurized, it loses many of the valuable probiotics found in its original state. Factory farming practices make pasteurization a matter of safety for commercial milk, but organic milk is different – especially if it comes from grass-fed animals. Keep reading to find out why…

Factory farms are scary places. Animals are packed so tightly that hygiene becomes impossible, antibiotics are used to keep the animals alive in inhumane conditions, and the milk that results is lower in quality and generally loaded with antibiotic residue and sometimes even hormones like rBST that interfere with the human endocrine system.

Raw milk, sourced from cows that are grass-fed and given adequate pasture aren’t exposed to the level of illness that is common in factory farms. The milk they produce is a living food, like the healthy cultures you know and love, raw milk is teeming with probiotic life. Critics of raw milk claim that it is less healthy than pasteurized milk, but according to Chris Kresser, the odds of getting an illness that would land you in the hospital from raw milk are 1 in 6 million. Those most at risk are pregnant women, young children, and the elderly, due to the potential presence of Listeria bacteria in raw milk.

The benefits, on the other hand, are numerous. Organic raw milk from grass-fed cows offers higher levels of conjugated linoleic acid than pasteurized milk, as well as readily bioavailable vitamins and minerals. According to research from the Weston A. Price Foundation, lactose intolerance issues are less common for raw milk drinkers, too. And then there’s the research regarding bacteria and allergies, asthma, or other autoimmune conditions. Research suggests that healthy gut bacteria provided by raw milk may play a role in decreasing these health conditions.

When made from organic grass-fed milk, raw cheeses are probiotic powerhouses that offer increased digestibility, as well as better flavor. Cheese gourmands, even those that don’t indulge in a whole foods lifestyle, still seek out raw cheeses for their supreme taste.