How to Make Fish Broth 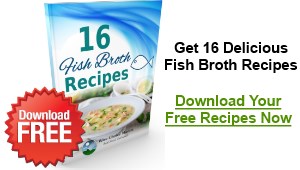 In the world of soup broth, there’s beef and chicken, and then there’s fish broth. Most people avoid making homemade fish broth because they can just smell that fishy smell even before they make it. Like everything in life, there are always choices. Though fish stock can be smelly and oily and literally stink up the entire house, it’s all about the fish you use to make the broth. And to be fair, most fish broth isn’t oily or smelly.

Advocates of fish broth suggest using non-oily fish including sole, snapper, rockfish, turbot, halibut, cod, and flounder. Some cooks also use freshwater fish, but saltwater fish are used more often. Some people avoid oily fish such as salmon, trout, or mackerel, but it is a nutritional myth that oily fish are not appropriate for fish broth. Native Alaskans have been making salmon broth for generations, favoring the most oily salmon from early spring. Nordics also have a long history of using salmon for broths. Salmon broth is deeply nourishing when prepared correctly.

Once you get past the smelly, fishy thoughts, fish broth has many benefits over other broths. High in iodine and thyroid strengthening hormones, it’s known to prevent tooth decay, improve mental clarity and cognition, and improve your metabolism. Fish broth also provides a good supply of gelatin, which is very healing for the gut. In short, it’s the most healing of all stocks.

Making your own fish broth is also less expensive then beef or chicken broth; it’s roughly $2.00 to make a gallon of fish broth and takes 2-4 hours to simmer. Chicken broth comes in second, costing roughly $20.00 for pastured chicken bones and takes 24-48 hours to simmer. Though beef broth isn’t the most expensive at $10-$20.00 for grass-fed beef bones, it takes 48-72 hours of cooking at a simmer to make the broth.

This recipe makes 12 cups (roughly 3 quarts) and comes from The Domestic Man’s blog. It is a simple, delicious broth with deep flavors.

If you’d like to try a delicious fish broth before you make your own or simply don’t have time to make it at home, just order your fish broth from Wise Choice Market .