Gardening on the Window Sill 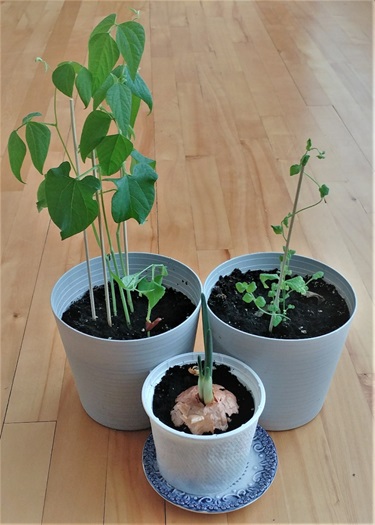 Seriously. Let’s mini-garden on the kitchen counter or on the dining table. It’s really easy!

Wait, what? There’s too much stuff on your kitchen counter already? Ok, no problem. We’ll find another spot. Let me just look around… A-ha! Found it! The window sills!

The window sill is a great spot because it has the advantage of the natural light coming from the outside.

Too bad the window sills in our house are way too narrow… Well, the kitchen counter it is!

Let’s get inspired by our mini indoor garden, featuring: an onion, four kidney beans and a mint sprig!

The mint is from a little sprig I used a while ago for making lemonade. Mint would grow roots if put in water, so I put the little sprig in a jar and sure enough, after a few days it grew a little root. I even considered planting it outside, but there’s no way it would have survived our harsh snowy winter. So here it is, on the right of the picture, happily clutching a chopstick…

The beans (on the left) are the outcome of my youngest experimenting with “growing stuff”’. Four kidney beans were carefully put on a paper towel and watered gently. Once they sprouted -a few days later- there was no stopping them, and we soon had to plant them in their own pot.

The lucky onion was discovered by me one hungry morning when I was going to fry it for my breakfast omelette. Reaching into the onion bag in the pantry, I suddenly noticed the little sprout on this onion’s head. I was so awed by the onion’s liveliness, I immediately decided to salvage it from its fate of becoming fried onion in my omelette. (Little does it know it’s still going in my omelette when it’s tall enough. Ha!)

Planting the happy trio in pots was super fun!

We used a bag of soil from the dollar store to fill up the pots. (But not all the way up, to avoid overflowing). Pat, pat, pat, then water gently. 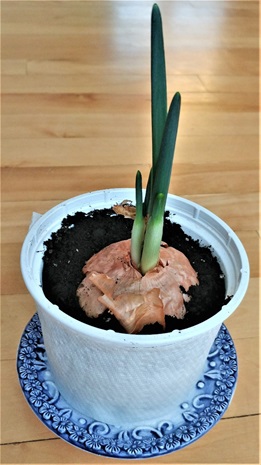 Chopsticks were placed for the mint and beans to lean on, or else they’d expand into the neighboring pots.

Since we only had two pots (but three plants), we used a small plastic yogurt container for the onion. We slit a few slits at the bottom of the container to allow any excess water to flow down into a saucer. (That’s important because too much water will rot the roots. And when you have a young child admiring nature’s wonders, it may well be that the plant will get watered every five minutes…)

And that’s the story of our cute little greenery!

Caring for a little sprout, then watching it grow is nothing short of wondrous.

It’s a direct, tactile, visceral connection with nature. I found this experience therapeutic and holistic.

I might even edge toward claiming that my daughter and I are growing (some of) our own food!

This newb here had great time growing an onion, and is now wishing you a most lovely weekend!

Psst! Don’t forget to check on your plants and water them when needed!