Foods of the Bible

Today we’ll embark on a journey.

We’ll travel back thousands of years to biblical times, and visit the Holy Land - the ancient land of Israel - on the eastern shores of the Mediterranean Sea. Using the scriptures as our food guide, we will explore the different foods mentioned in the Bible, and look at what people ate back then on a daily basis.

As it is impossible to cover all the hundreds of biblical food references in the scope of this post, we will concentrate on the main staples.

To understand what people ate, we need to examine the crops they cultivated, and which wild plants and animals were naturally available. Like many other cultures in that era, the ancient Israelite society was mostly agrarian (agricultural).

As people lived off the land and depended entirely on the weather, we’ll first take a look at the Mediterranean climate. The Mediterranean climate is characterized by long hot dry summers and short mild winters. With plenty of sunshine year - round and frequent droughts, if Californian weather comes to mind - you definitely get the vibe.

Given the weather conditions, most food was eaten fresh and in season. Fruits and vegetables had to be eaten as they ripened and before they spoiled. Unpredictable harvests - due to droughts - meant that whatever was not eaten fresh had to be preserved and stored for times of need. Thus, grapes were made into raisins and wine; olives were made into oil; figs, beans and lentils were dried; and grains were stored for use throughout the year. 1

Seven basic agricultural products, called the Seven Species, are listed in the Bible 1, representing the main crops of the ancient land of Israel.

"A land of wheat and barley, and vines and fig-trees and pomegranates; a land of olive-trees and honey;" 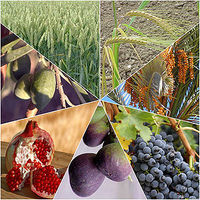 Bread from wheat and barley, wine from grapes, as well as olive oil, were considered a fundamental trio in the ancient Israelite culture. 1

To this day, the blessing over bread and wine is practiced by both Jews and Christians all over the world.

”And from the finest wheat flour make round loaves” 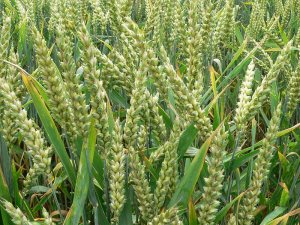 Bread was eaten at just about every meal, and is estimated to have provided from 50 to 70 percent of an ordinary person’s daily calories. The bread eaten until the end of the Israelite monarchy was mainly made from barley flour, 1 which was an easier crop to grow than wheat.

“I went down to the grove of nut trees
to look at the new growth in the valley,
to see if the vines had budded
or the pomegranates were in bloom.” 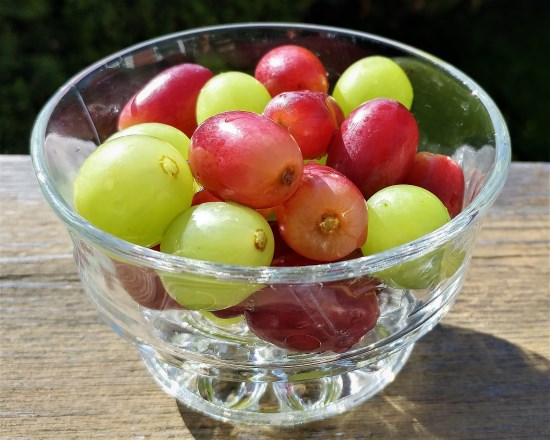 Fruit was an important source of food for the Israelites, particularly grapes, olives and figs. Grapes were grown mostly for wine, although some were eaten fresh at harvest time, or dried as raisins for storage. Other fruits that were eaten were the date, pomegranate and sycamore fig. 1

Fruit was also boiled down into thick, sweet syrup, referred to in the Bible as honey.

Grapes, figs, dates and apricots were also dried and preserved individually or put on a string, or pressed into cakes. Since dried fruit are an efficient source of energy, they were prepared as provisions for journeys. 1 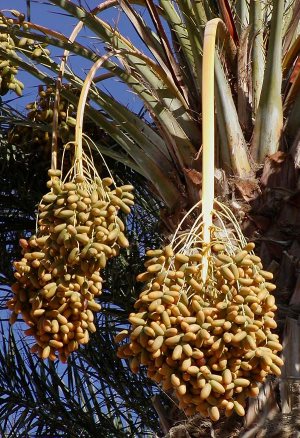 Dates were eaten fresh or dried, but were mostly boiled into thick, long-lasting syrup called “date honey” for use as a sweetener. This syrup was prepared by soaking the dates in water for some time until they disintegrated and then boiling the resulting liquid down into thick syrup. 1

The honey in the Seven Species scripture is in fact date syrup: "A land of wheat and barley, and vines and fig-trees and pomegranates; a land of olive-trees and honey"

To this day, date syrup is a common sweetener in the modern Israeli cuisine as well as in many other cuisines across the Mediterranean region.

“If your grain offering is cooked in a pan, it is to be made of the finest flour and some olive oil.” 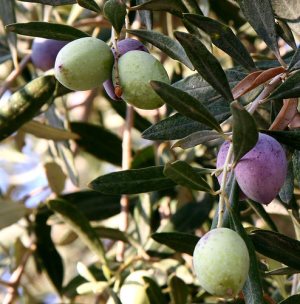 Olives were grown exclusively for their oil, 1 which was used not only for food and for cooking, but also for lighting, sacrificial offerings, ointment, and anointment for priestly or royal office. 1

To this day, olive trees grow on hills and mountains throughout the country. Local olive oil can be found in virtually every household, and is used for various salads and cooked dishes. One very common salad is fresh veggie salad made from fresh tomatoes, cucumbers, peppers, and sometimes onions, and seasoned with salt, black pepper, lemon, vinegar, and a generous dose of extra virgin olive oil. If you are familiar with the Greek salad, than this one is a close relative, only without the cheese.

Another favorite is pickled olives, often homemade and sold in big jars in many farmers’ markets.

“So I have come down to rescue them from the hand of the Egyptians and to bring them up out of that land into a good and spacious land, a land flowing with  milk and honey” 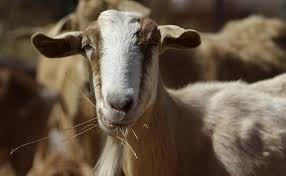 Goats, and to a lesser extent, sheep, provided milk for part of the year. 1

Given the weather conditions however, fresh milk could not be stored for a long time, and had to be preserved.

Typically, milk was stored in skin containers, where it quickly curdled and turned into a type of yogurt called Lebben.1 Chunkier than yogurt and less sour, this delicacy is a very common element in Israeli diet to this day, and can be found at every grocery store across the country. A favorite with children and adults alike, it is often served as a healthy snack in many child care facilities, and for many families it is an integral part of their daily meals.

Goat and sheep milk were also churned into butter or made into cheese.

Soft cheese was made by straining milk through a cloth. Harder cheeses were obtained by letting it further dry in the sun. 1

“You may eat any clean bird.”

The Israelites ate domesticated birds such as pigeons, turtledoves, ducks and geese, and wild birds such as quail and partridge. 1 However, consumption was usually quite small.

It is unclear when chicken was domesticated and became part of the diet. Until then, bird eggs were available in limited quantities, and had to be gathered from the wild. 1

“The angel of God said to him, ‘Take the meat and the unleavened bread, place them on this rock, and pour out the broth.’ And Gideon did so.”

The Israelites usually ate meat from domesticated goats and sheep. Goat’s meat was more common. For most people however, meat was eaten only a few times a year when animals were slaughtered for the major festivals, or at tribal meetings and celebrations. 1

The most common way to prepare meat was to cook it with water as broth or stew, with garlic, onion and leeks, and seasoned with local herbs such as coriander and cumin. This delicacy would be served to honored guests. 1

For long-term storage, meat was smoked, dried or salted. 1

“And the disciples picked up twelve basketfuls of broken pieces of bread and fish.”

Although a variety of fish from both fresh and salt water was available, in order to be transported further inland and away from the sea and rivers, fish had to be preserved by smoking, drying, and salting, which was considered quite expensive. It was therefore more common within wealthier families, or those who lived close to the coast or the main rivers. 1

In the north of the country however, around the Sea of Galilee and the Jordan River, small scale fishing was part of the agrarian economy. 1 Evidence to this is the story of Jesus’s disciples, several of whom had been fishermen in the Sea of Galilee at the time they met Jesus.

“Season all your grain offerings with salt.” 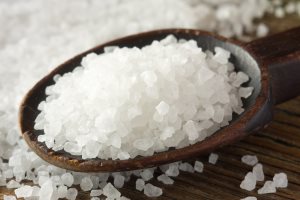 The most common and important seasoning was salt, obtained and evaporated from both the Mediterranean coast in the west of the country and from the Dead Sea 1 in the south.

Food was also flavored by plants and herbs most native to the region and either cultivated or gathered in the wild. Onions and garlic were used for seasoning as well as eaten as veggies. 1 Herbs and spices included capers, coriander, cumin and black cumin, dill, dwarf chicory, hyssop, marjoram, mint, black mustard, saffron and thyme. 1

“The people of Israel called the bread manna. It was white like coriander seed and tasted like wafers made with honey.”

Often referred to as divine and miraculous nourishment, it is not entirely clear what Manna actually was. It is mentioned several times in the scriptures, mainly in the book of Exodus, as a type of natural substance that the Israelites ate in the desert during their journey from Egypt to the Promised Land. 2 Scholars have suggested it may have been some kind of sap, resin, wax, honeydew, or fiber.

It appeared in the wee hours of the morning, and had to be collected before the sun fully rose, or it would have melted and vanished. It was mostly collected to be pounded into powder and baked into an ancient form of bread or cake. Raw, it tasted sweetish, but unfortunately had a very short shelf life, as it would quickly develop worms. 2

Where History Meets your Shopping Cart

“Everything that lives and moves about will be food for you. Just as I gave you the green plants, I now give you everything.”

The staples of the ancient Israelite cuisine are not limited to the times of the Bible alone, or to the Mediterranean region. Many of them have transcended the centuries and traveled the world, and are now available across the globe.

The next time you go to your local grocery store, if you see a bottle of olive oil, or grapes, goat milk, or even something as trivial as wheat flour, or any other item mentioned in this post, take a moment to think about the amazing history this item has, and the undeniable link between the foods our ancestors ate in biblical times and your shopping cart today.