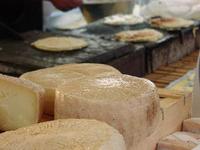 Looking for the perfect raw cheese to serve this holiday season? Sometimes the simple answers are the best. You’ll recognize the names on this list – they may even be hiding in your pantry. They’re more than just household names, however. These cheeses are among the world’s most popular, and with good reason…

Part of this cheeses’ name came from Mexican Franciscan friars living in Monterey, CA who invented the mild, semi-hard cheese during the 19th century. The other half of the name came from David Jack, a Scottish immigrant who came to the U.S. as an army contractor. He was quite successful, and eventually wealthy as a result. Jack purchased most of the real estate in Monterey Country and became a landlord. He ended up part owner of a several dairies on his land, and decided to market the Franciscan friars’ cheese recipe, first as “Jack’s cheese” and later as “Monterey Jack.”

Made from cow’s milk, and offering a creamy, smooth taste, this cheese goes well with crackers, quesadillas, or on burgers. Other common spicy, flavored varieties include Pepper Jack and Garlic & Herb Jack.

This buttery, yet sweet and nutty cheese is derived from traditional Swiss cheese, which it closely resembles. It was invented by Alfred Guggisberg in the 1960s on a farm located near Charm,

Baby Swiss has many small holes or ‘eyes’ and is often mistaken for Lacy Cheese, since they look similar. The two cheeses, however, smell and taste quite different. Made from cow’s milk, this almost translucent ivory colored cheese goes well with red and white wines, croissants, muffins, juices, sweet fruits, and berries.

Originating in Italy, this name comes from the word mozza which in Neapolitan means “cut.” Mozza is derived from the verb mozzare, meaning to “to cut off.” According to mentalfloss.com, mozzarella is produced by cutting the large curds and shaping them into bright, white balls.

Traditional Mozzarella is made from the milk of water buffalo herds found in a few countries, including Italy and Bulgaria. There are only a few herds of water buffalo, however, and most mozzarella today is made from cow’s milk. A semi-soft, brined white cheese, mozzarella has a milky flavor and is used in meats, seafood, salads, and vegetable dishes, but most often on pizza.

Hanne Nielsen created Havarti at her family’s farm just north of Copenhagen during the mid-19th century. After traveling around Europe, she decided she wanted to create a Danish cheese similar to the semi-hard cheeses found in Switzerland. The semi-soft, creamy, buttery cheese was named Havarthigaard, after the family’s farm.

Though Havarti is a very versatile cheese, and is easily sliced, grilled, and melted on sandwiches, it’s more of a dessert cheese, and is often paired with wine and fruit after the main meal.

Often confused with cheddar due to its color, colby was developed in 1874 by Joe Steinwand at his cheese factory in Colby, Wisconsin. Naturally dyed to appear orange, colby cheese is softer, sweeter, milder, and creamier when compared to cheddar. The cheese also doesn’t undergo the “cheddaring” process. Additionally, Colby is made with a washed curd recipe that reduces the acid content, making it less tangy.

Made with cow’s milk, colby is perfect with apples, pears, chili, grilled sandwiches, and rye bread. To bring out its flavor, Colby is blended with other cheeses, including Monterey Jack.

The blue mold in the cheese comes from a strain of penicillin called roqueforti which produces the blue-green marbling as the cheese ages. Maytag blue cheese is ripened over 6 months to develop a dense, crumbly texture and a semi-sharp flavor. The cheese melts in your mouth and is best served with crackers, or on salads or burgers. Paired with a glass of lager or ale, it makes a satisfying meal.

Originally made in the Somerset region of Britain, cheddar takes its name from the village of Cheddar. As early as the 12 th century, dairy famers used their excess milk to make a new kind of cheese which they carefully aged in caves near the village, aptly called Cheddar Gorge.

According to cheese.com, Joseph Harding, the "father of Cheddar cheese," described the quality of original Somerset Cheddar as "close and firm in texture, mellow in character or quality, rich with a tendency to melt in the mouth and has full and fine flavour somewhat like hazelnut!"

One of the most popular hard cheeses, cheddar gets sharper and crumbly as it matures. Its natural color ranges from white to pale yellow. Many cheddars are, however, dyed a yellow-orange color using natural colorings like annatto or paprika.

Hungry for raw cheese now? Check out our selection  here.