​7 of the Most Popular Cultured Foods from Europe

Europe is filled with rich stories which are often intertwined with the history and culture of food. Fermented foods and drinks have been part of western, northern, and eastern European life for centuries and possibly originated as a better way to store foods before refrigeration became available. 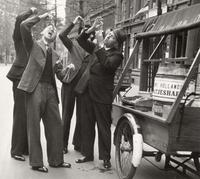 In France, this “fresh cream” is made from unpasteurized cream that curdles or ferments 1, using natural bacteria to thicken it. Crème fraiche can also be made at home by fermenting buttermilk with whipping cream. Though some cooks use sour cream interchangeably with crème fraiche, the ability to replicate the right texture and flavor depends on the dish it’s being used for. For salads and toppings, either one can be used. Crème fraiche is often used for soups and sauces and has a thicker, richer flavor that is less tangy than sour cream.

Originally from Iceland, this soft cheese is usually eaten for breakfast. Starters for skyr are difficult to find 2 online or at your local health food store. If and when you do locate one, use an unflavored variety. The whey in traditional skyr is sour, rather bitter, and may be used as a vinegar substitute. Other uses include curdled skyr for a non-cooked cheesecake 3 .

Dubbed the most popular street food in Gemany, currywurst has a cult following. Made with pork sausage, curry powder, ketchup, and mayonnaise, it is usually eaten with French fries and served on a paper plate. Originally made by Herta Heuwer in 1949 after WWII, currywurst was a dish that Germans could afford. Heuwer had a secret recipe for the ketchup which she never shared before she died at 86. Culinary historians believe part of the original secret sauce included Worcestershire Sauce, made with fermented anchovies 4 .

This traditional Eastern European fermented drink was originally made from stale rye bread. In Russia and the Ukraine, it’s considered a non-alcoholic drink since it has less then 1.2% alcohol. Kvass tastes like a cross between kombucha and water kefir, and can be made with a variety of fruits and vegetables 5 including beets, apples, peaches or raspberries.

This Eastern European street food is so popular in the Netherlands that some vendors only sell the pale, silvery fish, on a bun with chopped onions. You have your choice of smoked, soused, raw, and of course, pickled or fermented herring 6. Found in large schools, the species of herring traditionally used to make this dish is small and filled with protein.

Originally from Russia, this thick, rather sour cream is made of roughly 40% milk fat 7. Smetana is made by curdling pasteurized cream, and in Russia is part of almost every dish, from appetizers to desserts and main courses. If a dish needs to be baked with sour cream, use Smetana instead. Unlike other sour creams, it won’t curdle when cooked or added to hot dishes.

Usually made with trout or char, rakfish is fermented 8 for two to three months in a brine solution. The fish can’t touch the ground and must be in a tightly closed container with a weight on top. This Norwegian delicacy is served with onion, sour cream, butter, and flat bread. Due to the strong taste and odor, it’s best to have a beer or strong drink with this popular dish.