A Foot on Each Side of the Border 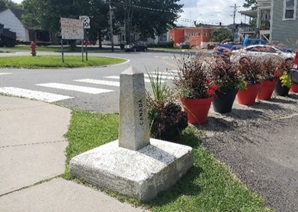 “Crossing the border from one country to another is quite an experience,” I was thinking to myself, as I snapped a picture of the row of flowerpots and boulders which mark the international border between Canada and the United States, just outside the Haskell Free Library in Stanstead, Canada / Derby Line, Vermont.

I sat on one of the boulders, my right foot in Quebec, Canada, my left foot in Vermont, and felt very international indeed.

It was a delightful experience.

But it also made me think about other places around the world, where stepping across the border into the neighbouring country, like I just did, would be unthinkable. The News is full of stories from all around the globe, of countries afflicted by political instability, war, conflict and terror, their borders guarded by barbed wires, electric-fences and a heavy military presence. Crossing into the often-hostile territory which lies on the other side would be unsafe, to say the least, and practically impossible. Imagine the toll this constant tension must take on the populations on either side.

The line of flowerpots between Stanstead, Canada and Derby Line, Vermont, therefore, is quite symbolic in my eyes. A peaceful border between two friendly neighbouring countries where on either side of the border lies a safe and free country. This shouldn’t be taken for granted. Personal safety, peace and freedom are precious. In many corners of the world they are mere wishful thinking.

How blessed we are to live here, safe and free, where we can sit on a boulder, with one foot in each country, and snap a selfie in between the flowerpots that mark this peaceful border.