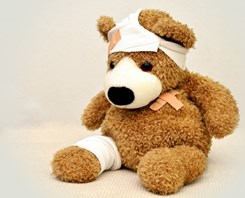 That day I went to pick up my daughter from school at the end of the school day.

As always, there were kids playing in the schoolyard.

Some kids were sledding down a snow hill, so entranced in the thrill of sledding, they were totally oblivious to the fact that other children were playing all around them.

I could spot my daughter playing beside another girl just a few feet away from the sledding path.

A typical mid-March day, the ground was icy- the sleds zooming down the snow hill at a high speed.

I remember a fleeting thought that it was only a question of time until somebody got hurt. And before I could even call out to them to watch out, it happened.

There was a shriek, then a crash, then a commotion.

A little girl was now lying on the ground, clasping her ankle, twitching.

I rushed to her, as did other parents. It was the girl who was playing beside my daughter. I glanced quickly at my daughter. She was intact, just a little shocked.

How can I describe how I felt when I saw the little girl lying on the ground? My heart went out to her. It was as if she was my daughter.

She was taken to the hospital shortly after.

That evening I looked at my daughter, happy and carefree, and I thought about the little girl and her parents spending the night in the emergency room, while we’re just going about our evening as usual. It could have easily been us. All it would have taken was for my daughter to be playing a few feet to the left.

A few feet were all there was between life as normal, with everything a normal life can offer, and life with a fractured foot, with all the things the injury impedes.

A precious gift I was given that day - my daughter was spared, and I was the lucky mom who would be taking her daughter to dance class, or soccer practice, or anything at all, while the other mom will spend the next few weeks helping her daughter walk with crutches.

Taking my daughter to dance class isn’t for granted. I’ve been truly blessed.